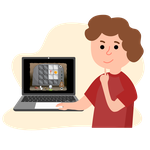 Go above and beyond: Does input variability affect children’s ability to learn spatial adpositions in a novel language?

Recommended by Chris Chambers based on reviews by Julien Mayor, Natalia Kartushina, Caroline Rowland and 1 anonymous reviewer
One of the major challenges in studies of language learning is understanding productive generalisation – the ability to use words and linguistic structures in novel settings that the learner has never encountered previously. According to discriminative learning theory, this skill arises from an iterative process of prediction and error-correction that gradually reduces uncertainty, allowing learners to discriminate linguistic outcomes and to identify informative, invariant cues for generalisation to novel cases. In the current study, Viviani et al (2022) use computational modelling to propose a central hypothesis stemming from this theory that children will learn the meaning and use of spatial adpositions (words such as “above” and “below” that describe relative positions) more effectively when there is more variability in the use of the nouns within the spatial sentences. They will also test a range of additional hypotheses, including that learning and generalisation to novel contexts will be enhanced when children learn from skewed distributions that are similar to those found in natural languages.
The Stage 1 manuscript was evaluated over two rounds of in-depth review. Based on detailed responses to the reviewers' comments, the recommender judged that the manuscript met the Stage 1 criteria and therefore awarded in-principle acceptance (IPA).

URL to the preregistered Stage 1 protocol: https://osf.io/37dxr
Level of bias control achieved: Level 6. Some of the data that will be used in the preregistered analyses was obtained in the second of two pilot experiments. However, since no further revisions to the analysis plan were made after this pilot, the risk of bias due to prior data observation remains zero, and the manuscript therefore qualifies for Level 6.